Category Archives: Pants on a Hooker

While the Comptrollers auditors cite a number of discrepancies in the town of Coeymans’ financial recordkeeping and checkwriting practices, it specifically cites the village of Ravena’s failure to pay its fair share of sewer billings because of Ravena’s “over the Town’s cost allocation method and costs incurred for sewer-related capital projects.” This forced the town of Coeymans to dig into the town general fund to compensate, which caused a cascade of problems.

According to the Comptroller’s report:

As noted in our prior audit report,1 the sewer district fund ended 2009 with a fund deficit of about $590,000 as a result of a shortfall in operating revenues. This shortfall was caused by the non-payment of sewer charges from the Village of Ravena (Village) resulting from a dispute over the Town’s cost allocation method and costs incurred for sewer-related capital projects that should have been accounted for in the capital project fund, rather than the sewer district fund. As a result, Town officials made substantial interfund advances to the sewer district fund from the part-town general fund to finance the revenue shortfall and capital expenditures. (Report, p. 7)

The sewer district fund’s liability originated in the years prior to our audit period. The sewer district fund’s finances were severely impacted in 2009 due to a substantial shortfall in operating revenues because of the dispute with the Village over the Town’s cost allocation method and costs incurred for sewer-related capital projects (previously discussed). (Report, p. 9)

The report goes on to say that the town of Coeymans did not accurately report the actual condition of the sewer district fund with serious consequences:

Although the financial condition of the sewer district fund has been improving and is better than originally reported, the failure to accurately report this information increases the risk that the Supervisor and Board will not be able to effectively evaluate and manage the Town’s financial activities. (Report, p. 9) [our emphasis]

General Municipal Law states that moneys advanced between funds are to be repaid as soon as the funds become available, but in no event later than the close of the fiscal year in which the advance was made. While the use of an interfund advance is a permissible form of short – term borrowing to meet current cash flow needs, it is not intended to be used as a long-term approach for providing financial resources. (Repport, p. 9)

This situation highlights why it is important to maintain accurate and complete financial reports so that the Board can determine the financial condition of a fund at any point in time. Without accurate financial information, the Board cannot effectively evaluate and manage the Town’s financial activities. (Report, p. 10)

The Comptroller’s auditors also found serious problems in the town of Coeymans payroll practices, lack of supervision of the payroll clerk’s operations, and failure to secure the towns check stock! Here’s what the auditors write:

An important component of any internal control system is proper segregation of duties over cash disbursements, which ensures that no one person controls all phases of a transaction. Concentrating key duties (such as authorization, recordkeeping, and custody of assets) with one individual with little or no management oversight through increased supervision significantly increases the risk that errors or irregularities could occur and go undetected. (Report, page 12)

That’s what the auditor’s found happening in Coeymans: one person has control over everything — just like in the village of Ravena and the town New Baltimore — which “significantly increases the risk that errors or irregularities could occur and go undetected.” Sounds like common sense, doesn’t it? Well, maybe someone should ask Mr Thomas Boehm, Mr Thomas Dolan, Mr Peter Masti, Ms Dawn Rogers why commons sense is in such short supply on the Coeymans town board? Didn’t the residents of the town of Coeymans elect the Gang-of-Four to keep an eye on things like this? Instead, they go ahead and cooperate with the village of Ravena on Ravena mayor John Bruno’s Make-Us-A-Ghost-Town Project or to rename the town Reubenville! Dumb as a box of rocks!

Coeymans Town Board
Boehm, Dolan, Masti, Rogers at Work for You

Actually, from where we’re sitting it looks like the only “significant irregularities” that have happened have happened in the voting booths: somehow Tom Boehm, Tom Dolan, Peter Masti, and Dawn Rogers got elected. Same “significant irregularities” happened in the village of Ravena when mummy-mayor John Bruno, the wicked witch-on-a-stick, Nancy Warner, and the Ravena Flying Monkeys, William “Bill” Bailey (a.k.a. “Ravena Mumbles”), Martin “Marty” Case (a.k.a. the “Tipsy Teacher”), and Rocco Persico (a.k.a. the “Shrinking Shrink”)  got elected! And don’t sit there sniggering, New Baltimore, you’ve shot yourselves in the foot with your painted piglet Susan O’Rorke and Chris Norris (Didn’t he get early retirement for mental problems? Says it was because of 911 but the record allegedly shows he was on vacation when 911 occurred!). But more on New Baltimore later. Much more!

There is an inadequate segregation of duties because of the payroll clerk’s over-involvement in the payroll process…As a result, there is an increased chance that errors or irregularities could occur and not be detected and corrected in a timely fashion. (Report p. 12 – 13)

In plainlanguage this means that the poor recordkeeping and lack of supervision of Town of Coeymans financial activties can’t detect who’s thieving or where. This same lack of recordkeeping and lack of supervision by the town of Coeymans town board is what we’ve been writing about with regard to the Coeymans police department and so-called chief Gregory Darlington. With almost every step the town of Coeymans town board members have tripped over their own feet and have failed the people of this town. (It seems the only two people in Coeymans town hall with any sense of duty or common sense are Diane Millious, the town clerk, and town supervisor, Stephen Flach, but they’re outnumbered at least 3-1 by the rocks-in-a-box, Boehm, Dolan, Masti, Rogers, and Darlington and his thugs!)

David Wukitsch, town attorney, is about as useful as tits on a bull or pants on a hooker!

One problem common to both the town of Coeymans and the town of New Baltimore is a legal-lesion known as a David Wukitsch, who acts as town attorney for both towns. Wukitsch is about as useful as a one legged man at an ass-kicking contest or pants on a hooker! Wukitsch’s legal advice has caused both towns more legal problems than it has prevented. We’re preparing an article on the town of New Baltimore and some of the craziness that Susan O’Rorke and her flying monkeys have cooked up, and David Wukitsch is right there to provide the worst legal advice available, second only to David Soares’ legal ignorance.

So, there you have it. The New York State Comptroller’s auditors confirm what we all knew in our deepest places what is true: We’ve elected a bunch of rocks to oversee taxpayer dollars, and that box of rocks can’t even put common-sense safeguards in place to ensure that you’re either not robbed blind — which is the case in the village of Ravena and very likely the case in the town of New Baltimore as it now stands — and the vile, hateful bunch of incompetents on the Village of Ravena board want to ship their shit to Coeymans and then default on the bill. Problem is, the town of Coeymans can’t even do the simple math or keep their beans in the proper boxes so Coeymans residents don’t have a clue how much or how little or where it is! 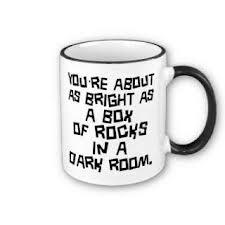