Trailer Trash In A Double-Wide

It’s also not surprising that search as I may, I just can’t find a photo or an image of the Coeymans Town Trailer? Can it be that it’s such a gem of the Hudson Valley, such an Objet d’Art that they need to keep it a secret?

Or is it, more accurately, because it’s such a den of corruption and iniquity that only those poor bastards unfortunate enough to have to appear there and be humiliated by the ignorant but arrogant town justices, an ex-cop and a former cafeteria manager, or abused by the hirelings of Coeyman’s police department chief Gregory Darlington and his troupe of  sadist pervert investigators and Albany PD rejects (McKenna and Johnson, included). I’d go for this latter option.

Now That I Have Your Undivided Attention…

That may at first blush sound pretty uncharitable and it probably is if you don’t think about it. But that’s the problem: You simply don’t THINK about things; more accurately, you don’t REFLECT on things, and you really ought to.

It’s only natural… that when someone comes and stirs up the scum in your pool you’re going to get pissed because the scum is stirred up, not because you were negligent and didn’t do what was necessary, the work, to keep it clean. Same thing for your community.

It’s only natural…that when you find that someone is pointing out your fat ass, and mentioning that it means trouble for your overall health that you become indignant at being called “fat,” and curse the person for the insult. But you know you’re fat and you know you eat unhealthfully and you know you don’t exercise enough but still, he called you “fat.” Same thing for your community, you know what’s wrong but you decide to live with it, deny it, work around it, and then you’re pissed because someone tells you something’s wrong and that you can fix it…if you care to.

It’s only natural… that you should all rise up and complain: “All teachers aren’t greedy!” Or “All teachers aren’t bullies, there are some very good ones.” You cry this out but you don’t also take into consideration that teachers, police, doctors, judges, men and women elected to public office are all in a special position in society; they want special respect but in return society holds them to a higher standard. Either they tow the mark or they go.

You want to wear crown? Well…

These privileged statuses also want to do their own dirty laundry, take care of their own. And so, when it becomes public that there are bad apples in the barrel, it becomes the task of the good apples to clean up the bad ones…or they can be included in the bad bushel, too. You want to wear the crown and wield the authority, enjoy the perks, do the dirty work guys and gals; clean up your litter boxes.

It’s only natural….that because it was YOU who elected them to their privileged statuses that you will get pissed and want to kill the messenger when it becomes obvious that you or those to whom you have delegated your decision-making authority have put jerks in those power positions. But rather than kill the messenger, why don’t you bite the bullet and lay down the rules for the perps and pervs; you put them where they are and you can kick them out. Why do you let yourselves be silenced by those at the head table? Remind them that they are public servants, not tyrants!

So you’ve been caught with your hand in the cookie jar?  It’s really humiliating for the crook to be found out and actually be called a crook. And it’s those types that get the angriest and the most vindictive when found out. Rather than ask forgiveness, seek reconciliation and change their ways (turn around), they retaliate. Same thing in the community: You call the crook a crook and he lashes out at everyone within reach. Low self-esteem is a very volatile condition and that’s what makes bullies, student bullies, street bullies, teacher bullies, cop bullies. But if the community were to have done its duty and if the community were to be a moral example and conduct its business ethically, Guess what!? Most of these uncomfortable situations could and would have been avoided.

We can only hope that more Laszlo Polyaks, more Donna Pasquinis, more Ann Marie Vadneys, more Jerry Bogardis, more Pam Powells come forward and speak out like those citizen residents do on a consistent basis. Only then will this community be able to rid itself of the tyrany of the Jerry Delucas, the Gregory Darlingtons, the Donna Hommels, the McTigues, the Matt Millers, the Bartletts, the James Latters, the Josephine O’Connors. Only when the community spirited among you become the role models can you take back control of your lives, property, children; the fearful and anxious majority in this community must shake off the fear and anxiety and return to controlling your lives and your destinies.

Please don’t misunderstand what I am teaching here. I’m not calling for lynch mobs, for banning, exiling, or ostracizing anyone but what I am preaching is that some really tough love might be in order for you to forgive, not forget, and to reconcile or not to reconcile with those individuals who have blackened and darkened this community and kept you silent all these years. It’s time to call out the bullies and to discipline them; its time for fair play, justice and fairness. It’s time to put them outside the community and allow them back into the community only after their moral and ethical lesions have been cleansed and are no longer a threat of infection to the rest of us.

It’s time to teach–not just talk about–the lost values of honesty, integrity, charity, simplicity, respect, humility, and generosity, teach those values to the children you all claim to love and cherish; why then do you expose them to indoctrination, propaganda, and indecent role models? They’re your flesh and blood; you have to fill them with morality, good ethics, and love. Smiles covering fear and anxiety just won’t work; nor will convincing them that sacrifice is a bad thing. Teach them good judgment not simply judgment.

Do A Family Virtue Pick!

Listening and watching the videos of public meetings you hear trembling voices, high-pitched tension, you see downcast eyes, suspicious, defensive  body language. People these are not the signs of a happy hobbit community; these are signs you’d expect to see in a concentration camp! Look at yourselves!

When self-interest and self-preservation lock horns and complacency becomes the only coping strategy, there’s no compelling religious, spiritual, civic alternative–community evaporates and each one of you becomes an island with only the delusion of freedom in community.

We are going to give the RCS Central School District a bit of  a respite for the time being; we are going to give the community the opportunity to step up to the plate and to help itself, to file their complaints with the New York State Education Department, the Office of the Attorney General, and other authorities,  and give those authorities some time to show their colors and to do their jobs,  investigate, audit, discipline. There are fish to fry in the town hall and in the police department; we’ll busy ourselves with them in the next several weeks. Stay tuned!

Gee! Was it something I said?

The Times Union, Including Its Blogs, Continues to be the Scatological Source in the Capital Region. It’s now the home to about 15-20 Sadomasochists Who Banter and Batter Each Other in About 105 Lunatic Comments. 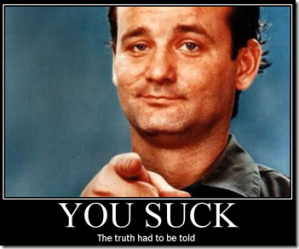 And You Do, Times Union!

The majority of the Times Useless RCS School Budget blog appear to be schizophrenics, each part of their schizoid brains using a different pseudonum and talking to the other part; they’re literally talking to the voices in their heads. And what’s even more hilarious is that these same looney toons have assumed oxymoronic names like “Sanity,” “Positivity,” and “RCSLady.” It’s a really popular blog (NOT!)and they have all of about 100 comments since May 2nd!  Being a care-provider by nature and training, I tried to engage them in conversation but the Times Useless blog moderator keeps deleting my comments. Was it something I said? Should I feel hurt about this? Here’s my most recent comment that, like the others (see my article: Times Union Doesn’t Like My Comments…) it disappeared while in moderation:

Let’s do some math. OK? There are about 12-15 commentors on this [the Times Useless] blog; some of you with multiple handles to make the impression that there are more of you. We’ve seen it all before; that lunatic Joan Ross in New Baltimore has found a new sandbox to litter in, and that psycho-delinquent-lurker comment-troll Tim Houghtaling (he’s still ignoring the warnings) does the same thing on the Smalbany blog. The Smalbany blog has almost 21,000 readers in about 1-1/2 months. We’d say that that’s not all that paltry for a blog of very local intererst, wouldn’t you? And the comments are all very positive; sure there are a few negatives but this blog seems to have the monopoly on bellyaching and negativity. Mostly because it’s all unsubstantiated gossip and rumor, something that would be unconditionally disallowed on the Smalbany blog. Most of you would have been banned long ago because you don’t make any sense! All speculation, accusation, rumor-mongering. At least most of the Smalbany blog people use their own names!

When you can’t handle abstracts and you are confused by the concepts, the ignorant automatically attack the person–ad hominem is what it’s called–it’s the lowest form of debate, and that’s what’s going on here. You’re not functioning with intellect, your flooding each other with infantile emotions. Grow up! Grow a pair! Wake up or shut up! Deal with the facts; offer some documentation, cite some sources (besides your lunatic pen pals). If you’re so worried about who the blogger is and are so concerned about his/her using his/her real name, don’t you think it a bit incredible that you all are doing exactly what you complain the blogger is doing: you’re all hiding behind fake names! Why is that, we wonder? You call the blogger a “coward” but what does that make you?

Furthermore, if you think you have such strong arguments, why don’t you just make a good argument in a comment for the Smalbany blog…not a rant…an intelligent comment. Try using your real name and let some of the 20000+ readers take a stab at it. That’s a challenge, everyone, go for it!

If you don’t have the URL for the blog, here it is: Smalbany.

Write a sensible, cogent, factual comment and handle the feedback. That’s something new for you! Use your real name, for once, and show the blogger that you can put your “principles” where your mouths are. Try it and we’ll hope it becomes habit.

My bet is that you’ll avoid the challenge–especially because the blog is restricted to adults and warns students and minors to leave immediately. I suspect many of you are the RCS students who have been banned from the blog.

P.s. The Smalbany blog is really quite well done and well written. Several of the local television anchors have commented positively about it. It counts among its visitors the NYSED, the Albany County DA’s office, the FBI, BOCES, many local residents, and a growing number of international visitors. It’s putting RCS on the map! Isn’t that great, people!

Times Useless Commentors.
Do you recognize any of them?

Well, there is a positive side to this: At least those crazies have  found a place where they can really feel at home, and the Times Useless has a readership of its own. We can be grateful they’re not here!