RSS
← Joe Vitollo for Congress? NOT!!! Never in this lifetime in this country!!!
WARNING: NEW STREET IN THE HAMLET STILL A HAZARDOUS AREA FOR TRICK-OR-TREATERS! →

Joe Vitollo Responds by Shooting Himself in Both Feet! Lousy Candidate but a great shot!

Mr. Joseph “Joe” Vitollo is running a second time on the Republican ticket for election to the United States Congress as representative of our area, the 20th Congressional District. Mr. Vitollo ran for the same seat in 2016 and lost. He ran against the same opponent in 2016, Paul Tonko (D), and lost. He thinks he can do better a second time around but we think that he’s delusional. We think the Republicans are running him knowing he’s a loser but running him anyway just to save face; they don’t have anyone who can beat Tonko. Why should they want to beat a man who’s done a good job? Why should voters want to replace someone who has demonstrated competence in government, hasn’t made an ass of himself, and doesn’t step all over himself when responding to questions?

We recently posted an article on Mr. Vitollo in which we publish some excerpts from his Facebook pages. We also publish some hard facts — they’re “hard facts” because they’re true facts and hard because Mr. Vitollo is finding it very hard to distance himself from them. In fact, Mr. Vitollo only digs himself deeper and deeper in the hole he’s already in and which is likely to become his political grave.

Vitollo has already revealed some very disturbing! aspects of his character but in two comments Mr. Vitollo himself made in response to the article, “Joe Vitollo for Congress? NOT!!! Never in this lifetime in this country!!!“, shoots himself in both feet. Here are his comments and our responses:

By the way the photograph of the foreigners making profane gestures are not my supporters which is a further mischaracterization it really discredits any credibility that you could possibly have.

In reply to Joe Vitollo.

Your comment further supports our observations. You call the individuals in the article “foreigners.” That is a profiling statement, a statement that reveals your deep-seated and dangerous prejudices. Those people, and that’s what and who they are, PEOPLE, may just as easily be a bunch of college students or dishwashers at the Congressional dining room. “Foreigners”?!?! How would you know that they are foreigners? What is a foreigner? Someone who is not American even non-American. You are making your decision about whether those people are Americans or not based on your prejudices and racist stereotypes. How can you judge who or what people are by their color, physical appearance, or even their gestures? Very, very bad statement, Mr Vitollo. It reveals your arrogance and your poor judgment. We don’t need arrogance and poor judgment in Congress!

Thank you for your comment and the further revelation of who you actually are. You do a better job than we could ever do of characterizing yourself!

This is a total mischaracterization of me if you want to know the truth why don’t you interview me but instead you use pictures and stories that are not true I have lived up here since 1977 most of my life and I’ve never had apart in Coeymans politics and the scandals have all occurred under democratic leadership so get your facts and your story straight before you start flinging accusations.

In reply to Joe Vitollo.

Why don’t you just say what’s true: You simply don’t like the fact that we have exposed a side or sides of you that you reaally don’t want to show. Isn’t that true, Mr Vitollo?

We have stated that you live in Coeymans and have lived in Coeymans, and you confirm that fact by revealing that you have lived in Coeymans since 1977. You also state that you “have never had apart [a part] in Coeymans politics and the scandals.” We say that, too, in the article. But we also ask the burning question WHY? if you have lived in Coeymans for so long and think you are some sort of leader, a leader capable of ushering in change at the national level, WHY HAVE YOU BEEN SO SILENT AND IN HIDING SO LONG IN COEYMANS? You impotentily and scurrilously point the finger at “democratic leadership” but we have to ask the question: Where was Republican leadership? Where was YOUR leadership? When all of the trouble and scandals were happening? Is it that you were unaware of what was going on right under your nose? Is it that you were hiding, not making a statement, not drawing attention to yourself? We don’t need a coward in Congress; we have enough of those already. Or, didn’t you care what was going on in Coeymans? You didn’t care until it was time to run for office. Right?

We’d be interested in knowing the answers to just a couple questions: First of all, if you have lived in Coeymans since 1977, what have you done to improve Coeymans? If you have never had a part in Coeymans politics, what would qualify you for a seat in Congress? If you can make the statement that all of the problems and scandals occurred under “democratic leadership,” you were aware of the problems and scandals, but did nothing. Why was that Mr Vitollo?

So, rather than just make blanket denials, give us some hard facts in your comments and answers. Enough of your dog-and-pony act, your smoke-and-mirrors politicking. Just some hard facts and straight answers. That’s all.

Thank you for your uninformative rant. It did nothing to help your case.

Mr Vitollo has revealed himself to be tainted, tainted with prejudice, profiling, stereotypes, and poor judgment. He’s too quick on the trigger and doesn’t think before he opens his mouth. He condemns himself with his own words and then tries to wiggle out of the corner he’s painted himself into. Vitollo is a pitiable piece of work and really should withdraw from the race before he further embarasses himself and his party.

Vitollo has no experience or education related to government, not even local government. Here’s what we found about him:

No organizational membership information on file.

“To join with others who desire to Restore America by Reducing the size of Government, Passing a Balanced Budget Amendment, Eradicate the NEA, Restore the strength of the middle class, and protect personal property rights”

But what we find that is really interesting, well more disturbing than interesting is his political experience: Vitollo’s only experience is as a candidate and a losing candidate at that!

Real original, right? Come on, Vitollo, if you can’t stop talking the stupid talk at least talk some stupid reality talk. You have no clue about what you’re spouting much less how to go about getting it done. But you’ll be a great tool for your keepers. If what you’ve done for your town, Coeymans, is any indicator of what you would do in Washington, we’d rather you just kept on emptying bedpans and wiping butts at wherever you’re working now. 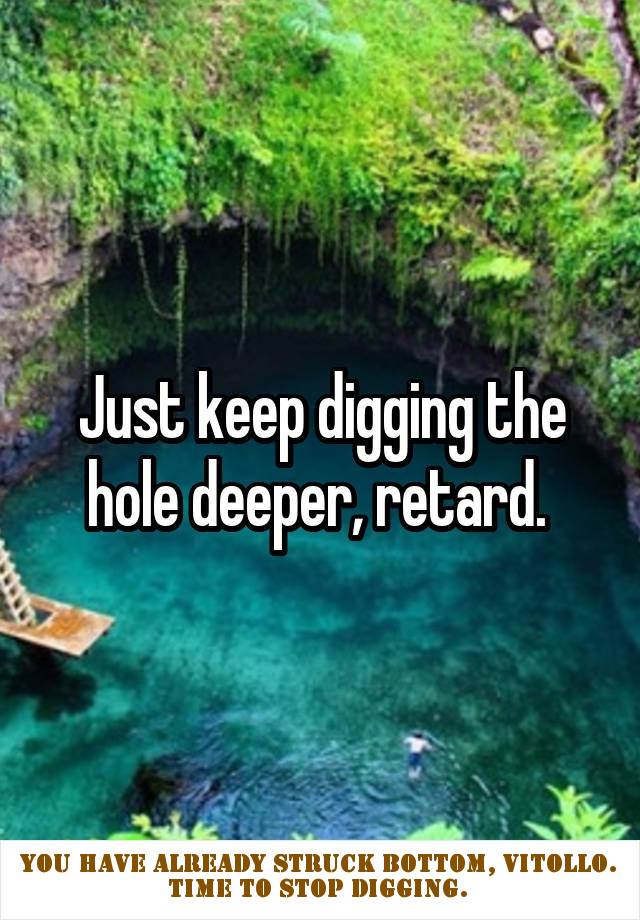 Read the Original article: Joe Vitollo for Congress? NOT!!! Never in this lifetime in this country!!!

← Joe Vitollo for Congress? NOT!!! Never in this lifetime in this country!!!
WARNING: NEW STREET IN THE HAMLET STILL A HAZARDOUS AREA FOR TRICK-OR-TREATERS! →

2 responses to “Joe Vitollo Responds by Shooting Himself in Both Feet! Lousy Candidate but a great shot!”