The Moose Makes History: A New Era of Life for Ravena

A New Age Dawns for Ravena!!!

The Moose Slams the Mummy Almost 2:1 Victory in the Ravena Mayoral Race!

The smalbany blog does it again! This is the third local election that this blog seems to have turned around in favor of the communities we serve! Thanks to our community contributors, we get the word out.

But we don’t deserve all of the credit, either!

The Bruno tyranny is ended, long live the Moose!

Barbara Cumm’s ingenious strategy in selecting a winning team from local business and community servants was a real winner! Cumm’s experience and wisdom has paid off again!

The Bruno tyranny is ended, long live the Moose! We have to hand the laurels to the Misuraca campaign because they did an incredibly great job of campaigning and public relations, starting with the unique and catchy moose signs throughout the area. The team was on the street pounding pavement and knocking on doors. A real down-to-earth, sincere campaign!

“We want to make the town more business-friendly,” Misuraca said. “We want to work more closely with the school district and try to restore some of the community pride and kind of give our Main Street a face lift.”

Although we’re not quite certain what the office of the mayor of Ravena has or should have to do with the RCS Central School District, we do want to caution Mr Mayor-elect Moose that there is plenty to be done in Ravena without getting involved with the RCS Central School District. And we recommend that mayor-elect Moose concentrate on the job at hand, which will be overwhelming if taken seriously: that is the job of rebuilding Ravena as a community. Leave the RCS Central School District alone; they have $42 million to play with and they’re not sharing it with Ravena (Matt Miller and the tearchers union will see to that). The office of mayor has nothing to do with the school district. If mayor-elect Moose and his village council want to get involved with youth, the Village of Ravena can fund some student/youth programs (once it gets rid of the illegal money pit, the Ravena Health and Fitness Center and Bruno’s pet Cathy Deluca).

If it appears you can’t control your own household how can residents expect you to run a village?

We do want to repeat our warning we issued at the start of the campaign: Jena Misuraca is the wife of the mayor-elect and should stay out of Village Hall. This talk of involvement with the school district sounds like a Mrs Mayor project and should be shelved immediately; it has nothing to do with governing Ravena. The voters elected Bill “Moose” Misuraca, not Jena Misuraca (and we don’t believe she ran for any trustee seats, either). If it appears you can’t control your own household how can residents expect you to run a village? If Mrs Mayor appears to be getting over-involved in village government because her husband was elected to be mayor, it could spell embarassment and problems for the new administration. Nip it in the bud, NOW!

All being said, we have to look on the dark side of things, too. Bruno has threatened to leave nothing in village hall for the new team to work with. According to a source who requested anonymity, Bruno has threatened to take his “years of hard work” with him and not to leave a scrap in village hall. Well, Mr Bruno, if you tamper or mess with anything in village hall, even remove a scrap of paper before you leave — we may be well advised to check with the office of the attorney general to see if such a threat might get Bruno evicted early from his office or have some security to check his briefcase and do a pat-down every day he’s in village hall — we’ll be on his hairy butt in a New York minute. Bruno was paid for his so-called demolition work while mayor and anything he did while mayor was paid for in full. Bruno has no personal or other claim to anything in village hall. Even any awards may be village property. So be careful, Mr Bruno, you lost the election and you need to leave village hall naked—or maybe with a little tar and some feathers, just to give you a good sending off. 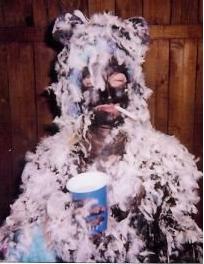 One of the first things we’d like to see is for the new team to get rid of that money-pit the Ravena health and Fitness Center, sell the junk to recoup some of the village taxpayers’ money and re-allocate the money to fund a youth activities center or something the village needs! Now that we have the human element back in village government, we can look forward to bringing families and opportunity back to Ravena. We’ll need programs to accommodate the new community members.

Another matter that needs the new mayor’s immediate attention are the many Notices of Claim recently filed against the village. It would be of significant benfit and a sign of good will if the Village were to attempt to settle the most serious of the claims pending BEFORE they go to full filing in state and federal courts — We know for certain that several high-profile, high value claims are pending filing as we write. (The same would apply to the Town of Coeymans, against whom there are several major claims pending.) The Notices of Claim are a Bruno legacy (made possible by the idiocy of Nancy Warner and Cathy Deluca) that you are inheriting and should seek to resolve before they are filed in state and federal court. A little good will goes a long way.

Something else we’d like to see is a cleaner, leaner village hall. Mayor Moose and his team have to get rid of the Bruno lackies, including Cathy Deluca, and the other parasites. Clean house, Moose! Fumigate the place and get rid of all the vermin. It’s the only way you can get a clean start!

The Moose and his team now have the majority on the village council. Next time around we get rid of Nancy Warner and that dolt Bill Bailey. But for now, Great Job! Congratulations to Barb Cumm and to the new blood in village hall, Bill “Moose” Misuraca, Keith Mahler, and Joel Coye!

Ravena Congratulates You!!!
The Editor

Top Stories in the Making:

4 responses to “The Moose Makes History: A New Era of Life for Ravena”