For Some Time Now We’ve Spared Coeymans Town Justice Phillip A. Crandall, Sr. Because He Seemed to be Less Corrupt or Ignorant than the likes of George Dardiani or Harold “Hal” Warner and his Tribe. Looks Like We May Have Been Mistaken. 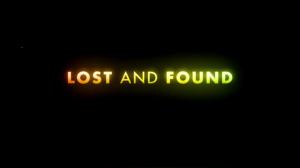 Please don’t misunderstand! I’m not soft on real criminals or crime. But I am in favor of a well-informed, fair, sensitive and compassionate, trustworthy and independent judiciary. I feel that if there’s solid evidence of a crime committed with real malice aforethought then it deserves severe treatment. If there’s no crime or no solid evidence, let it go and move on. But when judges are unabashedly corrupt, ignorant, unethical, and have become tools of political agendas and sleezebag lawyers or bobo cops, intimidating the innocent and punishing simple mistakes as crimes, then I go for the throat.

We’ve reported on the dire state of justice in New York State and the problems with the town and village court system where the all the education a judge needs is a high-school diploma, knows nothing about law, and might even be the local electrician or dog-catcher. That’s the situation in town and justice courts in New York State. It’s the situation right here in our own communities, especially in Ravena-Coeymans and in New Baltimore. The judges are ignorant, the don’t know the law, are barely literate, and pee themselves when they have to face a lawyer. (We published Justice in Name Only: Town and Village Courts in which we report on the terrible state of the town and village courts.) 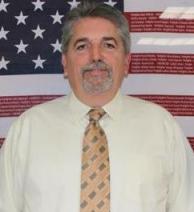 But in Ravena-Coeymans we have too many cases of the “disappearing felony” going on. And in other cases we have the Coeymanazis and their Coeymanazi judges using law enforcement and the town and village courts to harrass, to intimidate, to retaliate. The corruption is rampant and the criminals benefit. For example, we have the Coeyman’s cops arresting and charging local juveniles with misdemeanors and felonies while the cops refuse to investigate residents’ complaints of harassment. At the same time, they’re using their police powers to retaliate and intimidate and harass, and the courts delay justice or refuse it outright. (See our article, There’s a F*&amp;$%@% Elephant in the Room!!!)

We can see the corruption at work in Ravena-Coeymans almost on a daily basis but that’s just the lowest level of this cancer. The real festering sore is in Albany, in the Albany District Attorney’s Office. The District Attorney picks and chooses the cases he wants to prosecute. He then assigns one of his staff monkeys the case and it’s prosecuted in the courts. So, when you have a balless wonder like Pudenda David Soares in the DA office, he’s a tool used by the local politicos and the local political machine to reward or to punish, you have a really seriously corrupt system working on the community. The political godfathers get you elected but you have to play the game and do what you’re told. So we have the situation in Ravena-Coeymans where the already dysfunctional town and village court system is at its worst, we have either mindless cowards or Coeymanazis on the bench, the tool in the DA office in Albany, Soares, ensures that local machines get what they want. (For a more tongue-in-cheek report on the incest that’s going on read our article, Dirty-Hands Jerry Deluca–Coeymans’ Own Bobo-Cop). 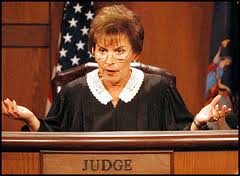 WTF!!!
Waddaya Doin’ Philly?
Are you some kinda Schmuck?

So back to coeymans town justice Philip A. Crandal, Sr. We reported on a local case where a local business had to go to the New York State police and Albany County Sheriff to force the Coeymans P.D. to investigate major theft and vandalism. That was late in 2011.  After six months of getting nowhere with the Coeymans P.D. who had assigned Coeymanazi-in-Chief Gerald “Dirty-Hands Jerry” Deluca (a.k.a. Bo-Bo-Cop) to investigate, and nothing happening, the NYS Police and the Albany County Sheriff were called in by the business and then the shite hit the fan. You should have been there to see Darlington and Deluca peeing themselves. Well, almost immediately, Scott Linden, the perp, was apprehended and charged. That was in mid-2012. 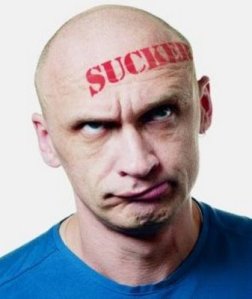 We’ve received unconfirmed reports that the perp, Scott Linden, appeared before Coeymans town justice Phillip A. Crandall Sr., who pretty much turned the perp loose with a slap on the paw. Now, local business owners, based on that typical example, you can expect that any criminal can trespass on your property, damage your inventory, and make off with a vehicle, and if Bobo-cop Gerald “Dirty-Hands Jerry” Deluca is in charge of the investigation, it won’t get investigated. If the Coeymans cops under the Coeymanzi leadership of chief Dodo-cop Darlington are in charge of going after the perp, the perp can look forward to walking the streets unimpaired. And finally, when Bobo Cop is forced to investigate and the Coeymans cops are forced to arrest, the Coeymans courts will turn him loose anyway. That must be how the Coeymans machine gets its voter support. The Albany D.A. David Soares is in charge of prosecuting these criminals but if he’d rather do a plea bargain at the expense of the law-abiding residents, he’d sooner let the perp loose on the community rather than prosecute. That way Soares can get a piece of the action. So, who’s still wondering about the business friendliness of good ol’ Coeymans? Add to that toxic mix the perp who hires local shyster Michael J. Biscone who will do his magic at town court to make the felonies go away…for a hefty price, of course. All for the good and in the best interests of law-abiding Coeymans residents and taxpayers. Now doesn’t that make you fell all warm and fuzzy…and safe? NOT!

Actually, in our article published on August 24, 2012, Dardiani and Biscone Subject to Discipline! we called for disciplining both Coeymans town justice George Dardiani and shyster Michael Biscone (representing perp Scott Lendin). At that time we reported that Biscone should have been held in contempt of court by Dardiani, when Biscone told the judge, Dardiani, that he wasn’t going to bring in his client! Why? Because Biscone said the Coeymans police had screwed up the paperwork! Click this  link to the article and read about the three-ring circus we call Coeymans! 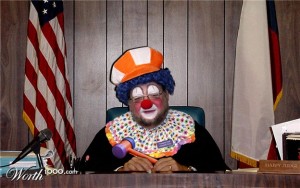 We now have an unconfirmed report that Phillip A. Crandall, a Coeymans town justice, has joined the ranks of the corrupt, he’s earned his stripes as a confirmed Coeymans Clown, and as a blemish in the New York State Unified Court System. Why? You might well ask.

(For your convenience, click the FOLLOW ME button on the top right of this page, enter your e-mail, and automatically receive notifications of new posts or comments!) 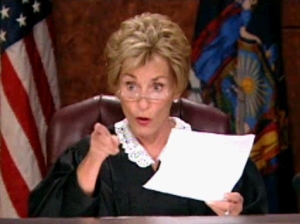 Judge Judy says: You better click that link below!