We’ve Learned that “Dirty-Hands Jerry” Deluca Has Hooked Up With His Evil Clown-Twin, a Specialist in Special Effects, Theater Sets, and Other Sorts  of Deception, John Luckacovic.

The similarities between the Deluca method and the Luckacovic method are astounding:

First of All:
They Look Alike!

In a beautifully written comment, one reader recently made an appeal to the ringleaders in the RCS Coeymanazi gang:

“One last thing, please if you happen to be one of the couples that this blog focuses on, for your own good, sit back, stop reading this, and enjoy your family. It is hurtful to me as an outsider to see anyone with family being made a mockery of. If you step back and get out of the limelight, it will go away and someday just be a bad memory.“

We don’t think that the reader meant that you should go back into the shadows, into the Twilight Zone, and continue to do your mischief from behind the scenes; what the reader obvously meant is “Give it a rest! Give the community a rest!”  “Dirty-Hands” Deluca apparently didn’t read it that way and, instead, is making some new friends…At least that’s what we’ve learned from new information we’ve received.

You may recall that early last May we published our article “A Little History Lesson,” in which we tell the parable of the dangers of social media, misinformation, and how people who, on the surface, appear to be community spirited are, in fact, really trolls inside. Well, it may behoove our readers to keep that article in mind when reading this report.

See if you can pick out John Luckacovic below

During the New Baltimore Water Wars Luckacovic and another evil import to the sleepy hamlet of New Baltimore, Joan Ross and hubby Bob Ross, managed to divide the New Baltimore community into previously unimaginably opposing groups. Luckacovic’s and Ross’ vitriolic anonymous publications created an atmosphere of suspicion, hate, and animosity in a previously harmonious hamlet. Sound familiar? It should! Remember the tactics used during the campaigning leading up to the budget vote?

Luckacovic and the Rosses had absolutely no interest in the community’s wellbeing or in progress. Their interest was simply seizing control and they did it by ambush and deceit. In fact, no sooner had Joan Ross enlisted the unwary cooperation of several New Baltimore residents than she cleverly coined the term, New Baltimorons, for her beloved neighbors! How’s that for community spirit?  Sound familiar?

Throughout the entire process Luckacovic and the Ross pair managed to appear squeaky clean, while misusing neighbors and lackeys to go out and do the dirty work. Sound familiar?

When a neighbor found out what Luckacovic and the Ross pair were up to and what they were conspiring, he denounced them and their methods, and rallied the community to wake up and see what they were up to. Sound familiar?

The plan to provide the New Baltimore hamlet with a much-needed public water supply, thanks to the efforts of Luckacovic and the Ross pair, was defeated. The hamlet of New Baltimore continues to have water problems.  The New Baltimore water project, in the planning for years, might have put New Baltimore somewhere on the map, but its defeat condemned New Baltimore to remain in the 18th century. We saw a replay in the May 15, 2012 school budget vote. The similarity between the two is mind-boggling!

Was the Deluca gang getting tips from the diabolic Luckacovic-Ross clowns?

Then, when a local resident ran for town justice in an effort to oust the corrupt and ignorant fixtures embeded in the town administration and to bring positive change to New Baltimore, the retaliation and smearing began again. They spared no-one, not family, not children, not friends, no one! Everyone and anyone associated with the candidate, even his honorable military service was fair game to the ambush cowards. Sound familiar?

Hiding behind the smoke screen of letters to the editor and paid advertisements they tried every trick in the book to smear the candidate, even enlisting outsiders to create scandalous rumors and get them published. The frauds committed and the evil done and condoned by Luckacovic and the Rosses through their lackies and ignorant henchmen was unbelievable…but Luckacovic and the Rosses were crazy like foxes…they managed to get others to do their dirty work while they sat back and played squeaky clean. They enlisted two henchmen, Richard Benham (an Austrian, now dead) and Scott Horne (an American who denounced his citizenship and now a Canadian citizen), both of whom had axes to grind (both were rejected by the candidate when they applied for jobs).

Not enough? Well, they also enlisted the Smalbany Times Useless to print their lies and even got their lackies to feed the idiot reporter, Guess Who? Scott Waldman, to print them. Sound familiar?

The cast of characters gets even more similar. When the defamed candidate took Luckacovic and the Rosses to court to answer for their lies, he did so representing himself, since the evidence was so overwhelming against Luckacovic and the Rosses. Somehow, according to a local insurance agent who at the time was carrying Luckocvic’s homeowners (was it Sturges?), Luckacovic tried to get the insurance company to cover his defense. He must have finagled some other creepy deal because he got his defense paid for by insurance, as did the Rosses, who all of a sudden were “employed” by Luckacovic’s company…was there insurance fraud involved?The case was assigned to Guess Who? Joe Teresi, former village and town attorney, now NYS supreme court  judge, father of former village and town attorney Greg Teresi. Little did the candidate know but Joe Teresi had been disciplined not once, but twice for anti-pro se bias; in other words, Teresi was disciplined for his tendency to abuse people who appear in court representing themselves! Fancy that! The New York State Unified Court System assigns a case in which the accuser is suing and representing himself to a judge, Joe Teresi, who they must have known had a record of abuse against persons representing themseves. Well, Teresi performed his role faithfully, and let the lawyers and Luckacovic and Ross trample justice and make a mockery of the whole system. Teresi even refused to allow the candidate to take the stand and speak. Teresi dismissed the case!

Only weeks afterward did it come to light that Teresi had his own baggage; had the NYS Unified Court System assigned the case to another, fairer, judge with no record of abuse, one who would have maintained control in the courtroom, one who would have made Luckacovic and Ross answer truthfully, the result would likely have been different. Instead, Teresi created a situation where Luckacovic and Ross could lie through their teeth and get away with it. It’s hopeless to attempt to get chronic liars to tell the truth, even when under oath. Sound familiar?

So, does the justice system sound familiar, too? It should, because the same bunch of yahoos are still running things and the same conspiracies are being hatched, and the same retaliation and intimidation is being launched against people with the common good at heart. Sound familiar?

Can You Pick Out Dirty-Hands Jerry Below? 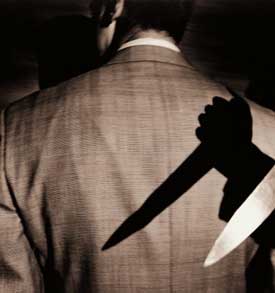 So, there you have it, dear readers: The scary clowns have found each other and the old saying proves true again: “Birds of a feather flock together.” But there’s another saying: “There’s no honor among thieves.” And that also proved true in the case of Ross and Luckacovic.  Ross, even while they were collaborating and conspiring with Luckacovic against the Town of New Baltimore, badmouthed Luckacovic calling him a “loose canon,” among other things, and stating to the very candidate they were later to libel and slander that the candidate’s manners were better than Luckcovic’s. Describing herself, Ross writes in an e-mail that she has a pattern of tearing apart anyone who doesn’t see things her way.  Talk about psychos! All of this in black and white in e-mails! Joan Ross has a reputation for e-mail campaigns.

Hubby Robert “Robby” Ross even gets charged by the state police with aggravated harassment when he uses his jeep as a weapon and attempts to run down the candidate. Nice bunch, huh? Remember a while back when the cement plant was being lambasted for emissions?  Well, Robert “Robby” Ross has had neurological problems long before he came to New Baltimore, but just to show you how psycho these activists are, they took advantage of the press Lafarge was getting and they actually blamed Ross’ twitch on the Lafarge emissions! Incredible! Ross is over 70 year old and at the time less than 10 years resident in New Baltimore! If their lunatic claims were true everyone in Ravena and Coeymans should have been dead years ago and their kids walking around with three eyes and gills! It’s in black and white, and you can read about it on one of the Smalbany Times Useless blogs (read Ross’ TU blog comments at  Heavy Metals),in one of the Ross’ famous misinformation comments to the TU!

The tactics are remarkably similar between the Deluca method and the Ross-Luckacovic method of corrupting an otherwise harmonious community:

Heard enough? Convinced yet? Send John Luckacovic and “Dirty-Hands” Jerry packing! It’s an aliance born in hell, raised on self-interest, corruption, lies, deception, and smoke screens. Send the scary clowns back to the satanic circus freak show where they belong.

Our advice to Dirty-Hands Jerry: We know the types you’re attracted to but really, for your own good and the good of the community, stay clear of your new friends. Take the advice of the reader and stay out of the limelight but stay out of the Twilight Zone, too. The characters you allegedly are courting are really bad news and are no friends of RCS.

Information Update as of July 16, 2012: According to our information, Jerry DeLuca, Ravena, New York was added to a local social media site by Cathy DeLuca about 2 months ago. John Luckacovic Director at 2Luck Concepts was added by Jerry DeLuca about 3 weeks ago to the same social media site. Since that social media site’s focus is on RCS gradutes and John Luckacovic graduated from Croton-Harmon High School, Croton-on-Hudson, NY (Class of 1967), and allegedly attended  Buffalo State College, Class of 1971 for theatre , art and design, he doesn’t appear to have any connection with RCS. Moreover John Luckacovic and his parner Eleanor Oldham give their addresses as 510 West 123rd Street, #67, New York, NY 10027 (New York County) and John Luckacovic, Box 473, 70 Reardon York, Canaan, NY 12029 (Columbia County). Accordingly, the RCS connection is very, very vague.

As for the other information provided in this article, the sources are court documents, depositions, newspaper articles, and actual e-mails. The statements and information are all verified.

The Community Is Now On Alert.

Don’t Put Up With It!
The Editor