RSS
← For the Sake of Decency and Respect…
Can You Explain This, Jerry? →

If You Think Election Fraud and Misconduct Are OUTRAGEOUS, Ask Superintendent Elizabeth Smith and Principal Brian Bailey About a Recent
Gun on School Grounds

and Why Established Security Procedures Were Not Followed!!! 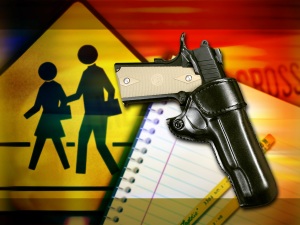 Guns On School Property!!!
Get Answers…NOW!

An anonymous report and unconfirmed details indicate that there may have been an incident of a student bringing a firearm weapon on school grounds. Giving all benefit of doubt, we don’t know whether the alleged weapon was a toy or the real thing. We also don’t know whether it was a simple mistake or if there was something more to the incident. What we DO  know is that the informant, a parent, was VERY outraged that the established emergency security procedures were not immediately implemented for the safety of the children and the personnel. We urge you to contact the Superintendent for details, if available. Contact information is at the end of this article.

FLASH Update:  May 16, 8 p.m.  We are receiving new information from residents who have stepped up! It appears there are some serious irregularities in the administration of the voting on May 15th. Stay tuned!

This is OUTRAGEOUS! Misusing middle schoolers and highschoolers is ABUSE and BULLYING by teachers or students! This is also a case of election fraud and misconduct! Report it! Demand Action! Contact those in charge of the district:

And the entire RCS CSD Board of Education at e-mail: BoardMembers@rcscsd.org

and demand an investigation and a public report by the Board of Education and the Superintendant.

Very Important: We and the New York State Education Department want to now and others want to clarify whether these irregularities need to be investigated by the authorities, and whether prosecution and discipline is required. Obviously, the answer to that question is a Yes!

Please continue to let us know if at any time during the voting on May 15, 2012, at the RCS High School you saw any of the above irregularities occurring!

← For the Sake of Decency and Respect…
Can You Explain This, Jerry? →